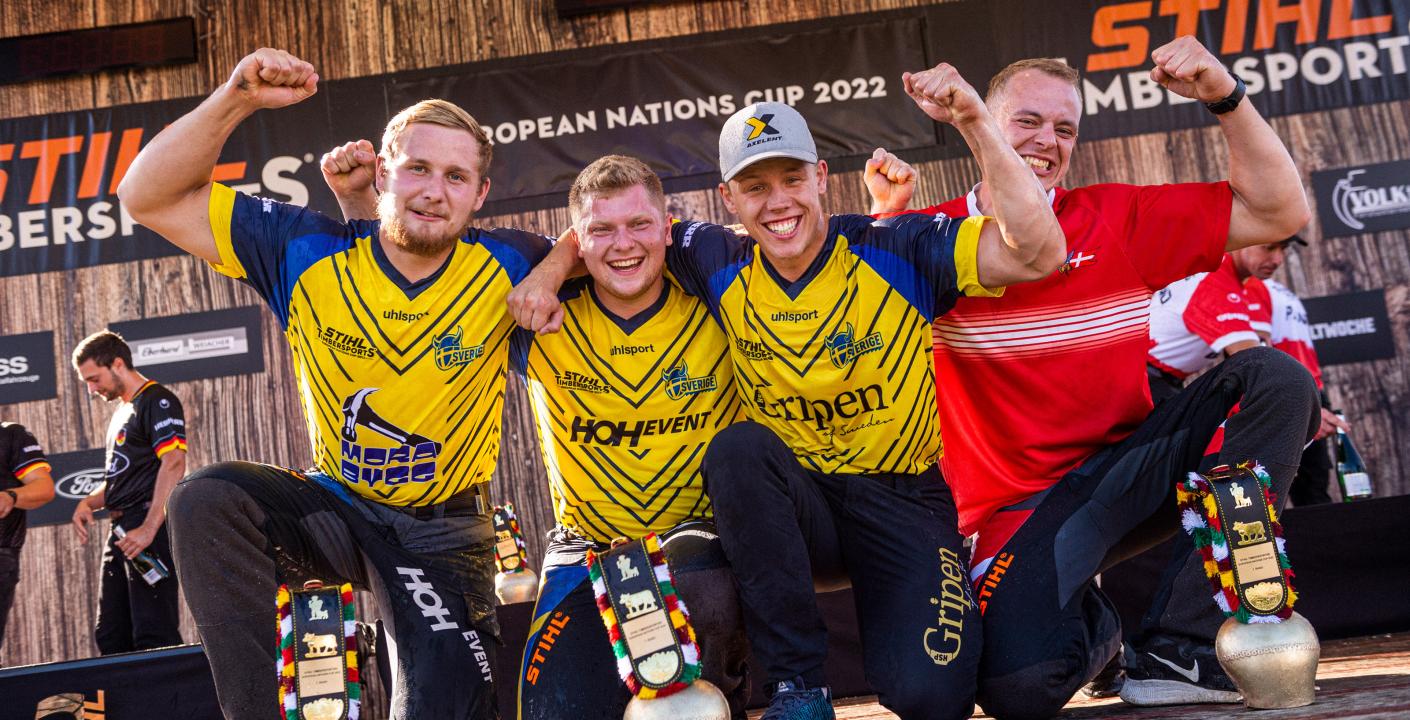 Wiach, Switzerland, hosted the TIMBERSPORTS® competition European Nations Cup on Sunday, September 11. The Swedish athletes Ferry Svan and Emil Hansson represented the Nordics in the PRO competition, while Swedish Edvin Karlsson and Danish Esben Pedersen battled in the Rookie competition. Together, the athletes won the competition as Team Nordics.

The penultimate TIMBERSPORTS® competition of the season for the Nordic athletes offered intense heats, as the form of the athletes was tested ahead of the World Championships in October. European Nations Cup also has a unique format, where the athletes’ individual performances add up to the score of their team. The Swedish athletes competed alongside Danish Esben Pedersen as Team Nordics.

Ferry Svan’s third place in the individual competition, together with Edvin Karlsson’s victory in the Rookie competition, meant that Team Nordics stood as champions of European Nations Cup at the end of the day. The highlight for Ferry Svan was a new Nordic record in the Hot Saw discipline.

– Overall, I’m pleased with how the competition tuned out. My performance was decent but there are things that I can do better. That’s what I take with me to the preparations for the WC, to fine-tune the details and, above all, to perform consistently in the Underhand Chop. I need to stack flawless heats in a row, that’s what the format requires, says Ferry Svan.

However, the standout performer of the Nordics was the Rookie athlete Edvin Karlsson, who finished an intense season with a gold medal. Karlsson snagged the win ahead of Polish Szymon Groenwald and French Loic Voinson.

– It means a lot to me to win this competition. The season has been a bit up and down for my part, so it felt great to finally get all the pieces of the puzzle in place. Mainly I’m pleased with my performance in Stock Saw, which has been somewhat of a mental barrier for me throughout the season. My ambition is to raise my standards further for next season, says Edvin Karlsson.

For Esben Pedersen, the competition marked an international debut, after resuming his TIMBERSPORTS® career this year. His individual performance led to eleventh place, but he took new Danish records in Standing Block Chop and Single Buck.

– It was a tough competition and I feel like I could have done better. However, I’m particularly pleased with my performance in Standing Block Chop, which meant a new national record. I have trained a lot the last months and see clear improvements, and I will continue to work hard to get even better for the next season, says Esben Pedersen.

European Nations Cup was the penultimate competition for Nordic athletes this season, who now has their targets set on the highlight of the season: the World Championships in Partille Arena, Gothenburg, on October 28 & 29. Svan and Hansson are part of the Swedish national team who will compete on Friday the 28th, alongside the Norwegian and Danish national team. Emil Hansson will also represent his country in the individual competition on Saturday the 29th of October.