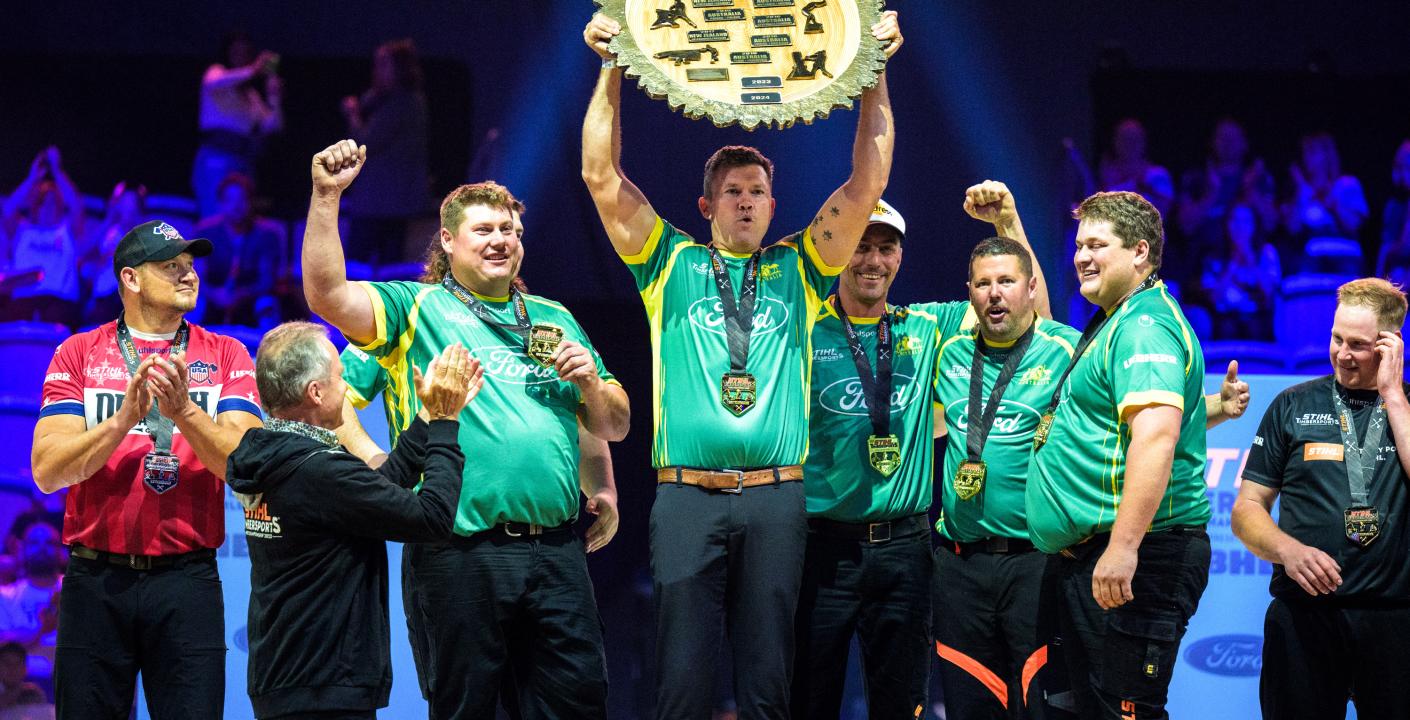 On Friday evening, the team competition in STIHL TIMBERSPORTS® World Championship 2022 took place in Partille Arena, just outside Gothenburg, Sweden. Australia took home the victory, after several tough heats. Sweden became the best Nordic team with a sixth place after being defeated by Australia in the quarterfinals. Norway faced tough competition and ended up in 15th place, while Denmark was knocked out early in the competition.

As many as 2,500 enthusiastic spectators gathered in Partille Arena when over 100 athletes from 20 nations competed in the Team World Championships in TIMBERSPORTS® in Gothenburg. The competition format is similar to a relay – one athlete starts and then the next one takes over, until all four athletes have completed their discipline. The team that finishes the four disciplines first moves on to the next round.

– The crowd was absolutely fantastic today. There was as tremendous atmosphere when we came into the arena, and we had full support from the stands and we really take that with us, says Ferry Svan of the Swedish national team.

The competition began with time trials in the afternoon, where both Sweden and Norway went on to the round of 16. Denmark did not pass the 2-minute time limit in the time trial, and faced Hungary in the “Last chance”. Hungary finished the entire heat first with a time of 1:27:90 minutes while the Danish team missed the time limit of 2:00:00 minutes and thus were eliminated from the competition.  The danish national team still wrote history, as the team member Felixia Banck became the first women to compete in the World Championship.

– It’s extremely fun and a great honour to be here and represent Denmark. It also feels very big to represent all women in sport, says Felixia Banks and continues:
– Before the next competition, we will work on making the transitions even better and practice our respective disciplines to be really strong for next year.

For Norway, it was an even heat but Switzerland won the duel and Norway's journey ended with a 15th place.

Nerve-wracking round of 16 for the home nation
Sweden’s encounter with Germany in the round of 16 was dramatic. With only one chop left in the Standing Block Chop, Emil Hansson’s axe broke and got stuck in the block. After a quick switch to a new axe, he landed the final chop and with a time of 01:16.34 and Sweden advanced to the quarterfinals.

– The heat against Germany was really nerve-wracking. The handle of Emil's axe broke and he was forced to change. The heart rate was high, but fortunately all went well in the end, says Pontus Skye.

In the quarterfinals, Sweden faced the reigning champions from Australia. An improvement in time to 1:11.64 wasn't enough to beat Australia's impressive time of 56:78. In the final, Australia was pitted against the United States, and it was ultimately the Australian team that took home the victory. With a time of 52:96 in the final round, Australia secured their third gold medal in a row.

On Saturday 29 October in Partille Arena, the individual competition in STIHL TIMBERSPORTS® World Championship 2022 will take place. Emil Hansson, 21, from Sweden will represent the Nordics against eleven other nations for the title of world champion.