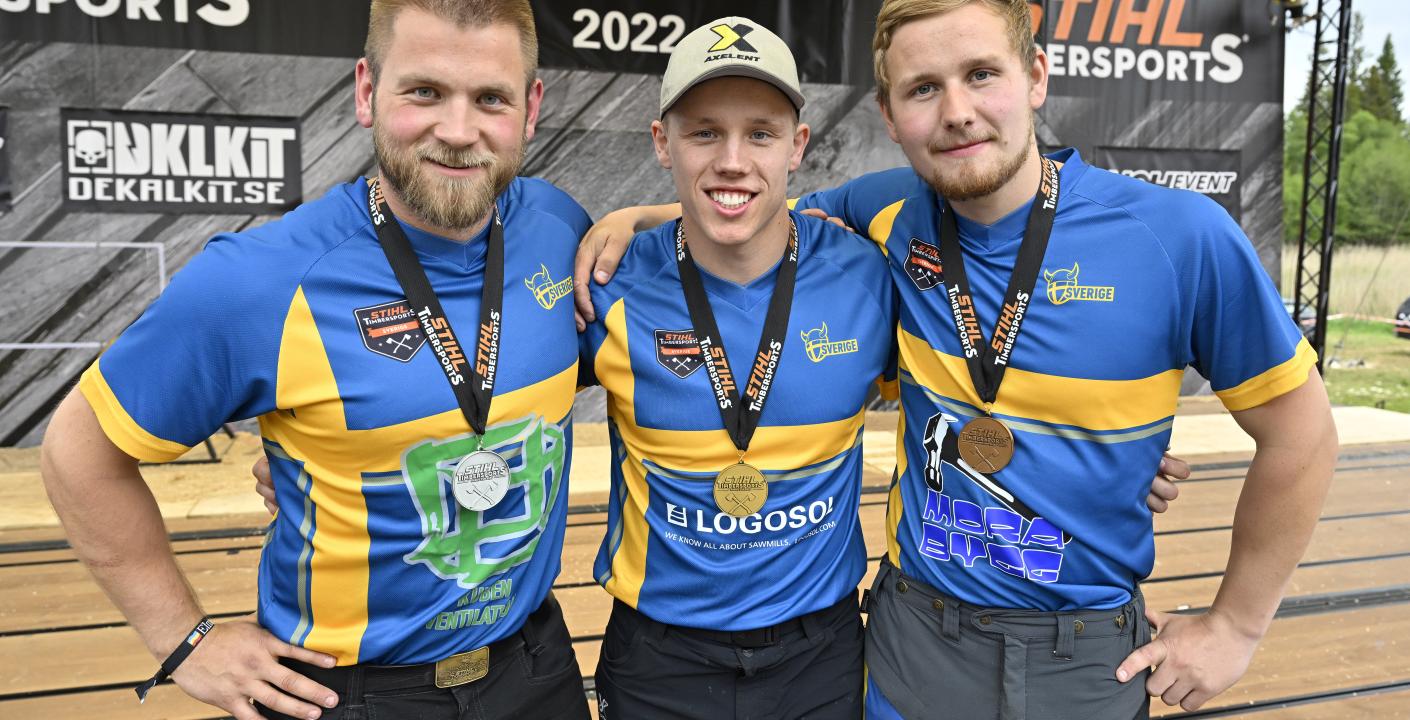 During the forestry fair Elmia Wood this weekend, TIMBERSPORTS® held two Nordic competitions: Nordic Cup and Nordic Trophy. The competitions gathered more than 20 athletes from all Scandinavian countries. At the end of the weekend the Swedish athlete and reigning Nordic champion, Ferry Svan, was the winner of both competitions. This means that he will compete in European Trophy on July 3.

The competition, which lured both curious visitors and fair participants, offered action-packed heats and a high level among the athletes. In the Trophy-format, athletes must complete four disciplines in one go: Stock Saw, Underhand Chop, Single Buck and Standing Block Chop. The two athletes with best times from each country qualify for the European Trophy on July 3, in Schirrhein, France, provided they meet the time limit. The first and second places were won by the Swedish athletes Ferry Svan and Emil Hansson, who will travel to France this summer for European Trophy.

–The first heat felt great, I got a slightly better time than I thought and was pleasantly surprised when I saw the clock. The second round I got a little stuck with the axe and lost some time. But overall, it was enough to win. I am particularly pleased with the Underhand Chop, I had a flow in my strokes that I have missed for a while, says Ferry Svan.

– I am very happy to have qualified for European Trophy, which was my goal. The first heat felt very good, especially Single Buck which floated well. The second heat went a bit slower, but I am happy with my overall performance, says Emil Hansson.

Strong performances and broken records during Nordic Cup
During both Friday and Saturday, PRO, Rookie, Intermediate and Women competed in Nordic Cup. On Friday, Ferry Svan won the PRO class, with Nordic records in Springboard (00.48:97) and Hot Saw (00:06:22), followed by Calle Svadling in second place and Emil Hansson in third place. Swedish athlete Edvin Karlsson won the gold in Friday’s Rookie class, where Danish Bo Andersen and Swedish Johan Staf finished in second and third place. In the women’s class Tove Njåstad, who just returned from an international competition in Vienna, finished first ahead of Swedish Åsa Nordberg. In the Intermediate class the winner, Swedish Emil Svensson, shared the podium with fellow countryman Peter Eriksson and Norwegian Klaus Magnus Halvorsen.

The podiums looked similar on Saturday, with the exception of the Intermediate class, where Swedish Viktor Clarmo took home first place ahead of Emil Svensson and Peter Eriksson.

– Overall, I am very pleased with my performance. I had a couple of slip-ups, but managed to break two Nordic records and got away with the win. It is fun to compete, and it is great that we now have a competition organization in Sweden, because you get good at competing by doing it more often, says Ferry Svan.

More competitions during 2022
Now European Trophy in Schirrhein, France, awaits Ferry Svan and Emil Hansson. Here, only ten of 16 athletes advance to World Trophy 2023. The Nordic athletes gather again on July 16-17 to compete in the Nordic Cup, in Hamar, Norway. They also compete in Orsa on August 6-7, again in Nordic Cup, followed by the big competition Nordic Championships, on August 27-28. This competition decides who and which athletes will represent their country individually and in teams during this year’s highlight – the World Championship in Partille Arena on October 28-29.